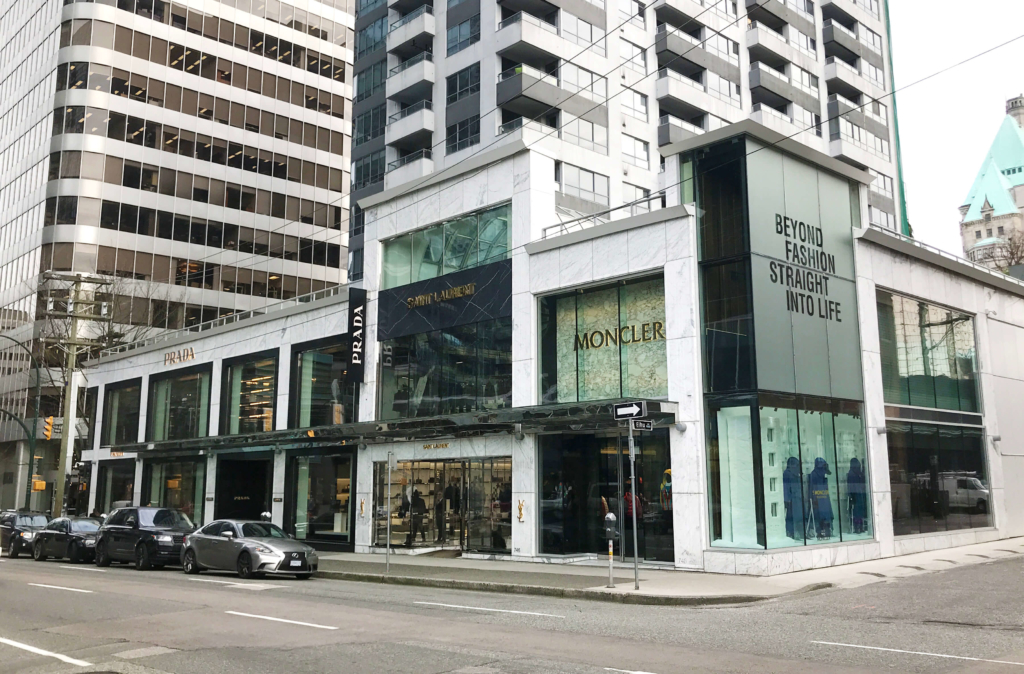 The Metro Vancouver retail market heading into Q1 of 2019 is showing signs of volatility. The abundance of chain retailers downsizing or winding down operations has created some uncertainty.

The volatility in the Canadian marketplace is in large part due to consumer preferences becoming increasingly polarized between luxury and discount. Mid-tier vendors have had to re-evaluate their marketing strategies in response to the shift in purchasing behavior.

Despite uncertainty, retail sales in Canada remain surprisingly strong with British Columbia continuing to show resilience with total retail sales amounting to $7.2 Billion as of Q4 2018.

*Total sales figure represents 2018 transaction volume of $1.7 Billion based on transactions over $1 Million.

The desire for retailers to join the Metro Vancouver market remains strong, especially within the downtown core of Vancouver. Luxury and off-price/discount retailers amount for the majority of retail sales in the region. Japanese discount retailer, Thinka, recently opened a 4,300 SF location on the 1100 block of Robson Street and plan expanding to over 200 location within Metro Vancouver over the next five years. Competition remains fierce within the market among retailers desiring to be in Vancouver’s “luxury” corridor on Alberni Street. Joining Hermes, Tiffany & Co., and Yves Saint Laurent in 2018 are Jimmy Choo and Oliver Peoples. A new international haute-streetwear retailer, Off-White, also opened its doors in the unconventional 4,300 square feet of laneway space behind De Beers, Prada, and Moncler.

The Changing Face of Suburban Retail

All suburban retail is experiencing some of the lowest vacancy rates in recent memory. In part this is due to the significant demand for residential real estate and the population growth throughout Metro Vancouver. The supply constraints are particularly tight in open air/strip retail centres which traditionally offer preferred retail fundamentals such as exposure, parking, ease of access and egress.

Nowadays, residential construction is the predominant form of new development in Metro Vancouver. Not only is there market pressure to optimize the land where shopping centres are currently situated, due to a shortage of land and escalating land prices, retail inventory is often being replaced with an inferior product – mixed use residential/retail. Residential developers are sometimes reluctantly required by city planners to include retail components within their multi-family projects to animate street-fronts. These new development practices are forcing retailers to consider forms of space which they are not accustomed to or have not had to deal with in other markets.

The disconnect in many cases is that there is new retail being brought to market, but new mixed-use developments are being built in areas which do not enjoy the retail fundamentals for success such as sufficient density, transit, or pedestrian traffic. The other problems often associated with mixed use projects can be that the retail space does include the amenities such as convenient parking, loading, ceiling height as well as venting and garbage storage. Nor can space often be configured because of columns and irregular spatial layouts.

Retail leasing specialists involved in the early development architectural planning process can help mitigate design shortfalls and help ensure the retail space is well suited to the widest range of possible end users. Under the right circumstances retail & residential components can function in harmony together and be a valuable amenity to the residential marketing and overall lifestyle experience.

Government Supports for Canadian Businesses During the COVID-19 Pandemic

In recent weeks, we have seen the significant economic impact of COVID-19, globally and locally. To...

The Impact of COVID-19 on Commercial Real Estate

Lee & Associates held a discussion with a panel of experts from our U.S. offices, moderated by...

Metro-Vancouver holds one of the strongest industrial markets in the world so it’s no surprise...